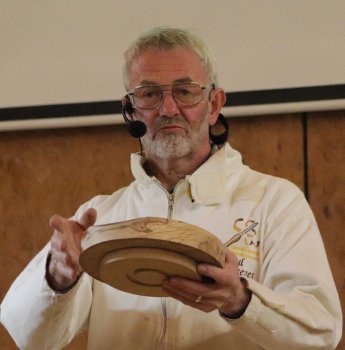 This Competition is to create a piece which combines spindle driven work with face plate / chuck driven work.
This invariably results in two (or more) pieces of wood turned separately and finish up joined together.
Effectively, some will be turned along the grain, the rest will be turned across the grain.

This makes for a very broad range of designs.
Below are a few examples : 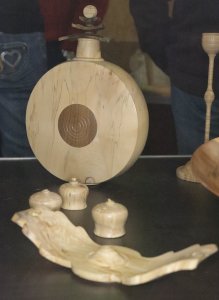 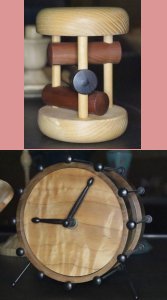 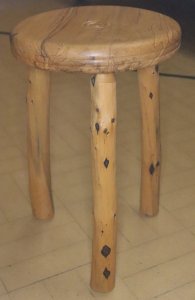 For the demonstration, Paul elected to turn a three-legged stool out of well-dried spalted Beech; ie the legs being spindle turned and the seat being face plate turned. 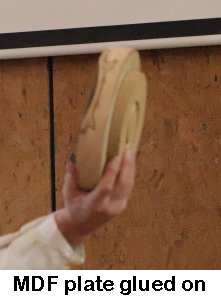 A roughly rounded seat had been band sawed from a plank and 5 blobs of hot glue were used to attach a MDF face plate to the intended seat top. The MDF had been prepared with a shaped hole to fit chuck jaws under expansion which allowed the roughed-out seat edge to be rounded out, the under-seat squared off and mortise centres carefully drawn at 120° to each other about 2" in from the edge. (If these were inaccurate, when the mortises were being drilled at about 12½° inward incline, the seat would not have been level). The underside was also hollowed out to fit expanding jaws for turning the upper surface but leaving enough centre wood to support a tailstock for finishing the underside.

Paul explained that he liked stool leg tenons to go about an inch into their mortise; but without some trickery, this would make the seat look very heavy. The deception is achieved by bevelling/coving the under-edge to leave enough thickness for the leg sockets. Weight can be further reduced by hollowing out underneath between the legs. 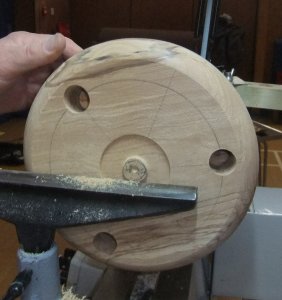 After the underside had been sanded with the lathe on, followed by sanding along the grain with the lathe off through the various grits, the MDF plate was prized off and the worst of the hot glue removed by hand before being remounted in the chuck to work on the seat upper surface.
If using a gouge to remove the last of the glue, be aware that a push cut can result in a 'dig in' as the glue residue might snag the tool tip. A better method would be to use a pull shear cut.

Now a decision has to be made; are we making a side table (needing a flat top) or a stool (with a slight dimple to improve comfort)?
This was to be a stool so a gouge rounded off the top outer edge to prevent a sharp edge under the sitter's thigh; and a gentle indent was turned.
The top was finished by sanding through the various grits, stopping to sand along the grain, inspecting, brushing all dust off before reversing the lathe direction with the next grit.
The piece now had to be remounted in either cole jaws or else between a tailstock and a grip pad up against an MDF face plate. This allowed removing the chuck jaw bevels and to finish hollowing out the centre of the underside.
Care must be taken with regard to how deep to hollow out. Beech does not turn well when thin! 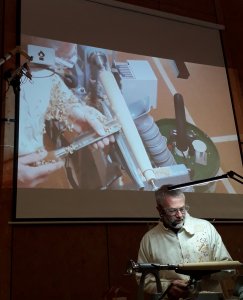 It was now time for spindle turning.
With 3 identical legs to produce, it is helpful to make a 'story stick' using a piece of wood with nails (or holes for an awl to poke through) to delineate the overall length and where significant highs or lows will be on the finished piece.  Paul favours a small rectangular stick with appropriate drilled holes for an awl to make an accurate mark when placed upon the tool rest while against the mounted wood.

His design for these legs was a baseball bat shape with a hemispherical foot and a simple straight taper into the tenon, without leaving a shoulder (which would be difficult to achieve without appearing unsightly at the inclined joint between leg and seat).  Tonight's legs just needed a Story Stick with a bottom end where the foot starts, a start point for the half round foot, a start point for the tenon and an end point of the tenon.

Having marked his spindle, Paul explained he found that a slightly oversized spigot is better formed at the tailstock end using a parting tool. He then angled his long tool rest to parallel the hemisphere start and the tenon start marks as a useful guide for the required taper to fade into the tenon.  When trimming down the taper with the tool rest at an equal distance, remember the need to gradually lift the gouge handle as the leg's diameter gets smaller. 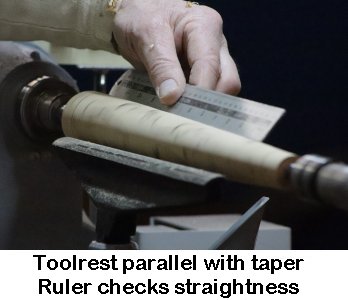 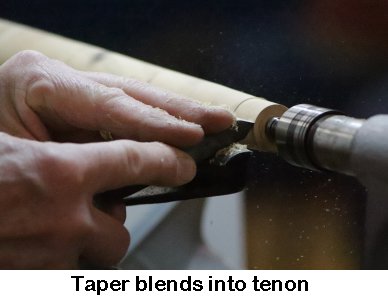 In order to leave room for glue, Paul finished off the tenon to a loose fit with a chamfer to aid assembly.
Traditionally, a bus ticket was used to take up the slack on an old stool where the legs had shrunk with age or use, for example, in the milk parlour! 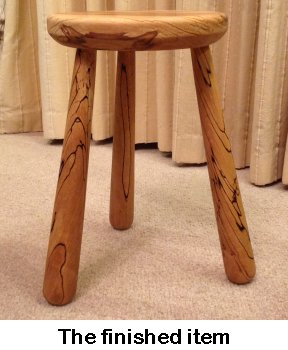 
The January Competition was set for a turned piece(s) comprising of a combination of cross-grain with along-grain turning in each completed piece.